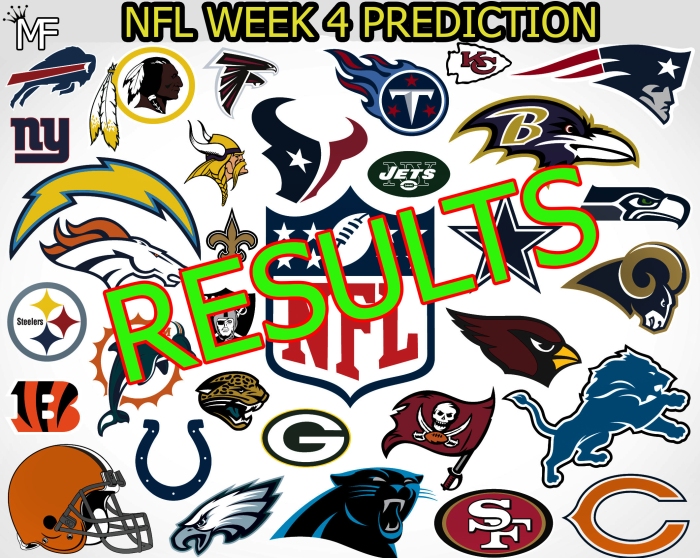 Honestly, any quarterback in the NFL right now who still has a place there can succeed in this offense; however, the difference between them and Ben Roethlisberger is Ben is one of few who can excel in it. Michael Vick still has a place in this league and he will prove it.

Miami’s defense just isn’t getting it done (41 points to the Bills last week). New York’s offense may not be the most high-powered, but their running game and defense will win this game for them.

Jacksonville just is not good enough to score enough points with what Andrew Luck can put up when he’s feeling it, even with this sore shoulder he’s been carrying

Without Victor Cruz the Giants won’t be able to match the amount of points the Bills will put up. Tyrod Taylor is on a roll.

Gut feeling. Jameis Winston is going to have a good week. No Luke Kuechly or Jericho Cotchery will leave sore spots on both offense and defense that, hopefully, Tampa Bay will take advantage.

Sam Bradford and Kirk Cousins have put up identical numbers; I think this one will come down to the run game, and Washington gets that edge with a struggling Demarco Murray and injured Kiko Alonso. Alfred Morris and Matt Jones out due Demarco Murray and Ryan Matthews

Jimmy Clausen is just not good. Even in Chicago against the Raiders. The combo between Latavius Murray, Derek Carr and Amari Cooper has potential to be really good. Especially against a weak Jared Allen-less Bears defense.

Julio Jones is just too good. 440 Yards in just three games is insane. If Houston’s offense plays well it’ll be all through Alfred Blue, and it won’t be enough to outweigh the connection between Matt Ryan and Julio Jones

Like most weeks, if the opposing defense can contain Jamaal Charles, then they will come up with a win. I think the Bengals won’t do that great of a job containing him, but they’ll still squeeze out a close one. A.J. Green is looking to have a big game at home, further spreading Andy Dalton’s TD/INT ratio (currently 8:1).

Josh McCown has something to prove to the Browns organization and fans. He needs to prove that Manziel is not the quarterback they are looking for, following reports that three starters would rather have Manziel under center. That being said, I don’t think he gets it done; there’s a reason he’s been a long-term backup QB. Phillip River is going to come out firing.

Aaron Rodgers is just going to handle business as usual, while Colin Kaepernick is going to keep up with his struggles. I see another blowout in the making, and the 49ers giving up 40+ points three weeks in a row.

Carson Palmer has won his last 9 starts, and I see him crossing into double digit territory this week. At 35, he’s guiding the league’s highest scoring offense at home with a fresh ACL. He’s currently playing his best football of his career, and it’s not stopping any time soon.

Like Jamaal Charles, if the opposing defense can limit Adrian Peterson, then they’re on their way to victory as Teddy Bridgewater just hasn’t shown the confidence and precision he did in college. Going up against the top-ranked defense in the NFL won’t be an easy task for Peterson, but he will manage. It won’t be enough, however.

Again, without Tony Romo and Dez Bryant the cowboys aren’t much of anything. Joseph Randle can only carry the load for so long. No way will Drew Brees let his team slip to 0-4 at home, especially if Brandon Cooks is healthy.

The Seattle Seahawks have won 7 straight and also won 23 out of their last 25 Monday night football games. With the 12th man, behind them the Seahawks are going to take this one away with or without a healthy Marshawn Lynch. Russell Wilson has seemed to be connecting with Jimmy Graham more often, and Kam Chancellor is back. What else could you need against a pitiful Detroit Lions defense?