The College Baseball postseason is in full swing, and you probably aren’t even aware. To the less-than-average baseball fan, your only interaction with college baseball comes from a relative playing Division 2 ball upstate somewhere, or you flicking through the various ESPN channels and stumbling upon a game for a split moment before you click away.

The next time that happens? Stay there. Spend an inning on that channel watching the game; listening, observing, and just watching. Even to a non-baseball fan, College Baseball isn’t like Professional Baseball.

Like the NCAA March Madness tournament, the College Baseball post-season is full of the same upsets, Cinderella stories, and 15-minutes of fame that we’ve become so addicted to come March.

Currently, the College World Series Table is set and ready to play; here’s why you should tune in:

College baseball players, unlike professional baseball, are allowed to use metal bats. Unlike their wooden counterparts in The Show, metal bats provide more pop. Metal Bats means more dingers, and more dingers means less of those lull-moments that tend to drive casual baseball fans away from the Professional Sport. Metal bats mixed with pitching ranging from mediocre to above-average is recipe for a good show. Have you ever seen Big Papi take Batting Practice with a metal bat? You should.

This playoff bracket in particular, the UC Santa Barbra Gouchos took down the favorites to win the whole tournament, the Louisville Cardinals, in a three-game series. Led by next year’s potential Number-1 Draft Pick, Brendan Mckay, Louisville succumbed to it’s second postseason loss to the Big West in as many years. In layman terms, this is the equivelant to Lehigh taking Duke down in March in 2012.

Arizona University was picked to finish 9th in the Pac-12 standings, and they just clinched a birth in the College World Series.

Not just one Cinderella story like you’d see in March, but three.

Oh boy. Where do I begin? This is college… remember that. Frat bro’s who would be Frat bro’s if their coach allowed it. You find one at least once a game who gets way too hyped, bat flips just a little too hard, or is the catalyst behind the benches clearing. It’s great. Too show you what I’m talking about, I’ve compiled a couple of my favorites from this postseason and over the years

Edgar Michelangeli – currently the most wanted man in college baseball.

UNC’s Bullpen – From this season.

For those who don’t know, the walk-off is the equivalent to the buzzer-beater in basketball; it ends the game and is always followed by a mobbing. These kids have done something that many have dreamed about, but few have actually done. This postseason, three teams have punched their tickets to the College World Series in Omaha, Nebraska in walk-off fashion.

The aforementioned UC Santa Barbra Goucho’s eliminated Louisville in style by way of Freshman Sam Cohen’s Grand Slam in the bottom of the 9th.

Arizona University will continue it’s incredible run to the CWS after being picked to finish 9th in the Pac-12. They knocked off Mississippi State after being down 4-runs in the 8th inning and rallying to win in the 11th inning. 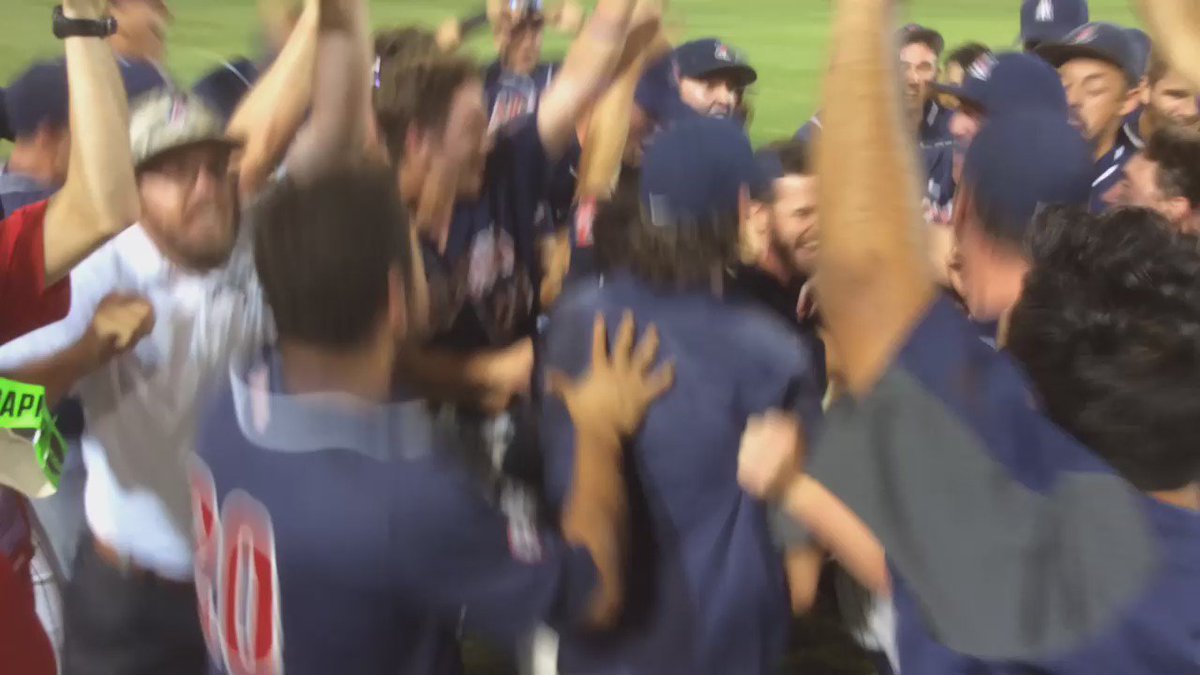 If you are a visiting pitcher in Blue Bell Park, you do not want to issue a Texas A&M hitter a 4-pitch walk…

It’s a tradition like no other, and a support system unmatched. You see it at every regional, super-regional, and CWS game; packed crowds, active fans, and people who know and love the game of baseball and their school.

Here is a schedule for the remaining games in the College World Series. Tweet me@Fuzznacht after you have watched a game or two and let me know what you think.

Whether you like baseball or not, you should at least give it a chance. Most of the gripes and annoyances that have drawn people away from Professional Baseball are taken away, or significantly watered down, and make the game tolerable for non-baseball fans. The game even adds it’s own spice in personalities and love for the game that Pro Baseball seems to lack.