The original article was originally posted on September 12th, 2016  on SportsTalkFeed.com and can be read HERE

The 2015 Pittsburgh Steelers ended their season in disappointing fashion, losing to the eventual Super Bowl champion Denver Broncos. In a season filled with backups and rarely a healthy team, their Super Bowl run was cut short by, not surprisingly, injuries to Ben Roethlisberger, Antonio Brown, and Le’Veon Bell all in one playoff game. Returning nearly the same team, the Steelers will be looking to prove that they can stay healthy and get back to the Super Bowl for the first time since 2011.

The Pittsburgh Steelers return to 2016 season at 10/1 odds of winning the Super Bowl, which is good for a share of fourth best on the list behind the New England Patriots (7/1), Green Bay Packers (7/1), and the Seattle Seahawks (8/1). The Steelers may be the biggest question mark at the top of the list, however, as suspensions, a poor secondary needing replaced, and injury concerns loom heavily over their heads.

The Steelers will try to burst out of the gate while tending to the wounds left by Running Back Le’Veon Bell (Missed Drug Tests), and Martavis Bryant (PED Use), who will be sitting out for three games and the whole season, respectively due to their varying suspensions..

Bell would have been looking to bounce back from the previous season that was already shortened by a suspension for a violation of the NFL’s drug policy, as well as a knee-injury in the playoffs, but will have to wait just a little bit longer to finally be able to cement his name as an elite player in this league; Bell played in just 6 games last season.

Even without Bell and Bryant to begin the year, the Steelers still post one of the most explosive offenses in the league led by one of the NFL’s best QB/WR combo in Ben Roethlisberger and Antonio Brown; they will need to be as explosive as ever if they plan on making a deep run into this year’s playoffs. With a young and emerging pass-catching crew, which is filled with two or three players who would be the number one option on various other teams, the Steelers will look to overcome the mere 16 points they posted against the Denver Broncos in their season-ending loss. With Markus Wheaton at WR2, a split between Sammie Coates and a potentially dangerous Eli Rogers at WR3, DeAngelo Williams stepping in for Le’Veon,  and Jesse James filling Heath Miller’s irreplaceable shoes at Tight End, the offense should be as fresh as ever.

The offense will need that freshness as the Steelers return the majority of their defense from last year; a defense that ranked 21st in total yards. That same defense showed signs of brilliance – see the October 18th game versus Arizona in which the team only gave up 13 points to a red-hot Cardinals team – as well as flashes of inexperience – see week 1 VS the New England Patriots where no one decided to cover Rob Gronkowski in a close game. In the 2015-16 year, the Steelers were 9-2 in games where they scored at least 21 points.

In last seasons preview, I set the standard for the defense at 17 points a game and I’m going to do the same again this year. With more experience, a stronger front 7, and new additions such as Justin Gilbert* and Artie Burns, the defense should show improvement from last season and if the offense can put up 17 a game I see no problem in taking home an AFC North title. 17 points should be an easy task for this offense, and it will more than likely be surpassed multiple times, but for a team where injuries have spoiled many great seasons you just never know. As for the defense, 17 is not a game to gawk over, but is also not a game to forget; it’s where they should be.

*Justin Gilbert is looked at as a bust to some, but I believe this is a crucial point for him to turn his career around. Just be patient. Hard to go wrong here for what the Steelers gave up (2018 6th-round pick).

QB – #7 – Ben Roethlisberger – Ben is back for his 13th year as a Pittsburgh Steeler and has certainly lived up to the hype brought by his 11th overall pick in 2004; he has led Pittsburgh to three Super Bowls and eight playoff appearances. Ben recorded 3,938 yards and 21 touchdowns in just 12 games played after a sprained MCL sidelined him for four straight weeks. If Ben can stay healthy, 5,000 yards passing isn’t an unrealistic number with a more experienced Wide Receiver core and Antonio Brown by his side. 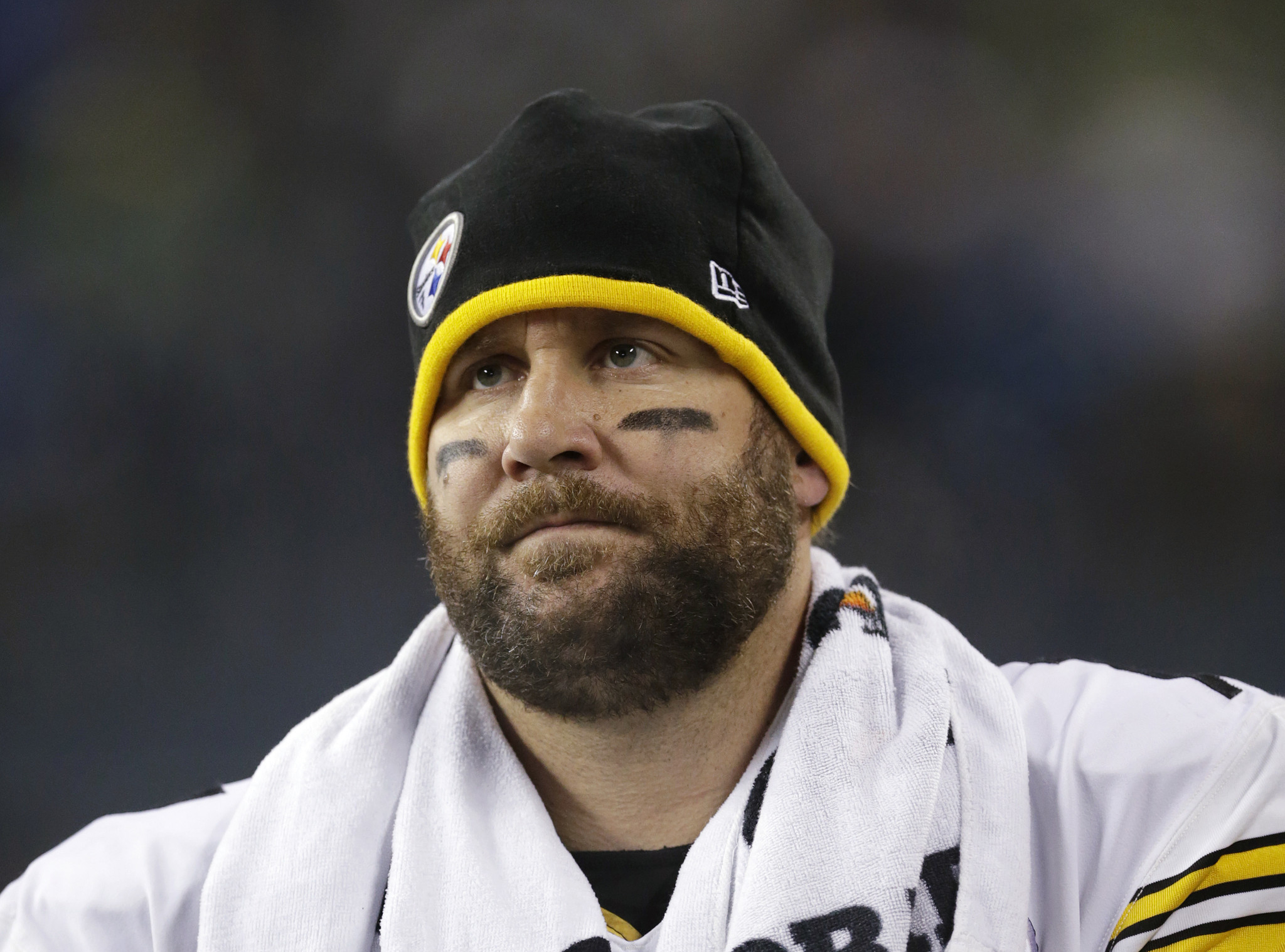 RB – #26 – Le’Veon Bell – Le’Veon will be facing a suspension for the first three games of the NFL season for failing to participate in a drug test. This all comes after Le’Veon was suspended two games in 2015 after he was arrested with former teammate LeGarrette Blount for marijuana possession. Le’Veon recorded 556 yards rushing and three touchdowns in just six games played last season, and will certainly be looking to make his mark as an elite running back in the NFL; something he has yet to do as a result of his off-the-field-issues. Bell will also be returning to the field for the first time since tearing his MCL against the Cincinnati Bengals in last-years playoffs. For now, DeAngelo Williams will take over the workload for the time being.

WR – #84 – Antonio Brown – Arguably the best receiver in the league, Brown and Roethlisberger will be looking to continue their success on the field as one of the best QB/WR combos in the NFL. Brown is coming off of a career-best year tallying 1,834 receiving yards and 10 touchdowns, highlighted by a 17 receptions for 284 yards win against Oakland. Antonio Brown’s combination of agility and elusiveness make him susceptible to extend any play into a touchdown. Alongside a skilled  group of Wide Receivers, Brown’s numbers should only go up being Ben’s #1 safety blanket with Heath Miller in retirement; team’s will soon realize they can’t afford to double team him.

WR – #11 – Markus Wheaton – Taking Martavis Bryant’s slot position this season will be Markus Wheaton. Wheaton will start the 2016 campaign on the sideline while he battles a shoulder injury, but will see plenty of time on the field once he is healthy. The former third round pick out of Oregon State recorded 201 yards on 9 catches against the Seattle Seahawks last season. Expect him to inconsistently record great games when Antonio Brown is double covered.

WR’s – #17/#14 – Eli Rogers & Sammie Coates – Eli and Sammie have been competing for a roster spot all preseason, and will likely split time once the team is fully healthy. After receiving high praise, Rogers, who missed all of last season with an injury, will start the season opener at the slot position in place of Markus Wheaton who will not play due to an injured shoulder; he could be a receiver to keep on your radar if he receives enough attention in the first game. Coates saw action in seven games last year, but only caught 1 pass for 11 yards. Expect this duo to be looked at to take the pressure off of Antonio Brown in the middle of the field. Sammie Coates should also see time as a punt returner. 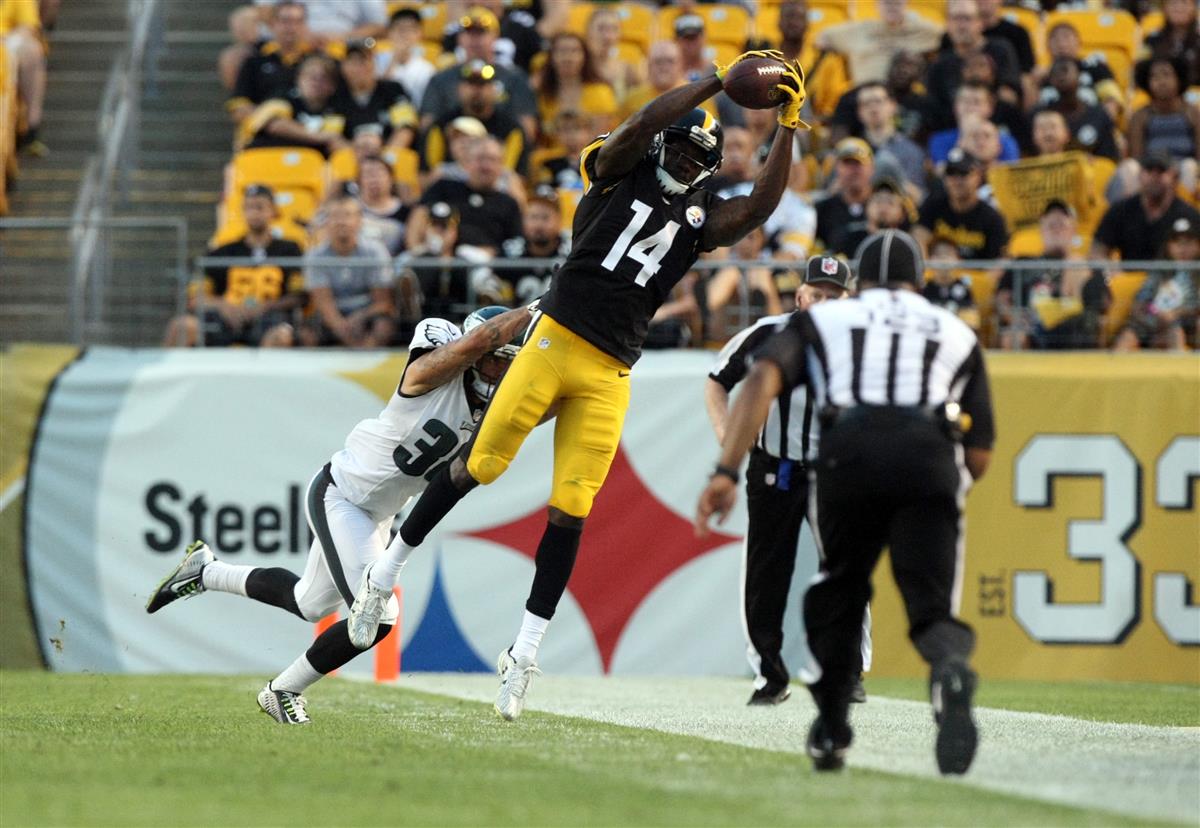 TE – #81 – Jesse James – Jesse James may have the most pressure on him out of any one on the team; if not the most pressure, he has the biggest shoes to fill. Heath Miller left a legacy as a Pittsburgh tight end that may not soon be filled, if ever. James will look to be a prime target in the red-zone as well as an efficient run-blocker. The 6’7” fifth round pick out of Penn State caught just 8 passes in as many games in his rookie year. I’m curious to see how long Steeler Nation will yell “HEEEEEEATH” instead of Jesse’s name.

Offensive Line – LT: Alejandro Villanueva, LG: Ramon Foster, C: Maurkice Pouncey, RG: David DeCastro, RT: Mike Gilbert – The Steelers had been notorious for a bad offensive line in the past, but all of that seems to be working itself out as the Steelers finally have a stable offensive line. Giving up just 33 sacks last season, the offensive line also created running room for 1,724 yards from scrimmage (with a suspended Le’Veon Bell) last. With contract negotiations out of the way, the line should be as relaxed as ever.

Front 7: LE: Cam Heyward, NT: Javon Hargrave, RE: Stephon Tuitt, LOLB: Arthur Moats, LMLB: Ryan Shazier, RMLB: Lawrence Timmons, ROLB: Jarvis Jones – Led by defensive coordinator Keith Butler, the Steelers run a 3-4 defense that has been known for their Hall of Fame caliber linebackers and run-stuffers. This year is no different, as Cam Heyward, captain of the defense, is joined by rookie Javon Hargrave to create havoc upfront. Ryan Shazier leads the linebackers with his intelligence and speed (dude runs a better 40-time than any of the wide receivers). Four of those seven are former first-round picks who are all still young and will continue to grow. Cam Heyward led the way last season with 7 total sacks, but it was Lawrence Timmons who totaled the most tackles with 119, 32 more than the next highest on the team (Ryan Shazier).

The Pittsburgh Steelers secondary is the biggest concern and question mark of the team. Last season, as I stated in my summary, the team showed signs of brilliance, and inexperience. Which side will show most often will be a main factor on if the Steelers can get back to the Super Bowl for the 4th time in the Ben Roethlisberger era. With more experience this year, and more depth, the secondary has the potential to surpass last years easily. With the addition of former 1st-round pick Justin Gilbert, who is looking to revamp his career after being dubbed a bust, may find the light at the end of the tunnel in Pittsburgh if he can help this defense get back to where they once were. New draft pick Artie Burns will likely be caressed under the wing of William Gay who brings veteran experience that helps fill the void left by Troy Polamalu.

*Most important moves to note are in bold

All Steelers preseason and regular season games can be heard on the Steelers Radio Network on WDVE-FM (102.5) and WBGG-AM (970) as well on Steelers.com. All preseason games will be televised on KDKA-TV.

* Times and TV network may change due to flexible scheduling

** All Times are Eastern

13-3 with losses to the Chiefs, Bengals, and Patriots. AFC North and Super Bowl Champions.*

The Steelers are known for losing games they should win at least once a year (Chiefs), losing to an AFC North rival (Bengals) and to the Patriots. There is no reason, if healthy, that this team shouldn’t make a deep run to the playoffs.

I’ll be posting my playoff predictions soon and will be rationalizing my choice so be on the lookout for that.

Writers note: If you would like to discuss what I have written here you can write me on twitter @fuzznacht or e-mail me: Mfass.sports@gmail.com